My wife is out of town on business, so in the early evening of this past Thursday, I was pondering what to watch. We have a few shows on streaming services that we are in the midst of, and I don't wish to watch any of it without her, so I turned to our DVD collection and pulled an old title that I'm sure she has little interest in. It's a film from 1982 that I first saw in perpetuity on HBO. This is when HBO was ONE channel.
The name of the movie is "The Last American Virgin" and stars actors that you may or may not have heard of, with the exception of Diane Franklin, the same actress from the John Cusack comedy from 1985, "Better Off Dead" and "Bill & Ted's Excellent Adventure" of 1989. Diane is a petite, beautiful, dark-haired actress with unique dimples and dark eyes. 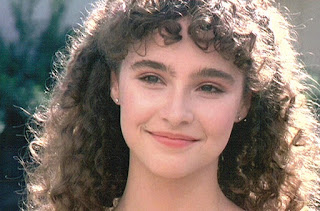 The movie shares a theme with "Fast Times at Ridgemont High", also released in 1982. Both have their funny scenes and over-the-top teenage sex romps, ludicrous characters, and music from the era, but "LAV" as I will now refer to it, has something special, and that's Karen, the character Diane plays. Gary is the main male character and Karen is his obsession. He sees her everywhere and does silly things to get her attention. But, as luck would have it, Gary's handsome friend steals her and gets her pregnant. The handsome friend, of course, is a major tool that one would love to beat into the sidewalk with a bat, maybe a 2x4, or, better still, a bus. He rejects her and tells her the pregnancy is her problem and that their relationship is over. Gary rushes to Karen's rescue and the obligatory 80s montage is comprised of scenes where Gary drums up the dough to pay for an abortion. Please don't judge, it's just a movie, it was in the script, and "Fast Times" did that, too. In any case, his caring for Karen is heartbreaking to watch as he takes her to his vacant grandmother's home to recuperate. In the end, Gary scans through the crowd at a party and finds Karen has returned to his evil friend's side. A shocker to me the first time I saw the film. And... well, that's it. Movie over. I know what you're thinking and you're right. It's bullshit. Gary should have won the girl and fuck that asshole friend of his. I know. I know. The despair of the world we live in, friends, is the good guys quite often don't get the girl. 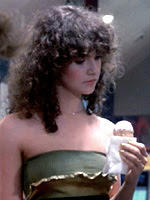 Here's a video featuring scenes from the movie, set to James Ingram's song: JUST ONCE


As soon as I began watching "LAV", I was transported back to the early 80s. I was 12 years old when this movie came out and the memories of my first crush flooded my brain. You see, Diane looks very similar to a schoolmate of mine. This girl is of Italian descent, petite, and dark-haired with eyes of a very deep brown. Each time she passed me in the hallway in Junior High, I met those eyes all too briefly, and my heart pounded so hard I thought I would faint. Every time.
This crush I had was intense, and I'm sure that we've all been there. In the months and years that followed, her tiny feet wore holes in the very fabric of my feeble, immature, pre- and post-pubescent mind. From Junior High to High School, she was my heart's desire and, to this day, her face is forever imprinted.
The memories continued to play out as the movie played on, and the dire awkwardness, the anxious feelings of self-doubt, and the silent, desperate loneliness of my teenage years came back to me. I didn't fit in anywhere or with any group of fellow students, had few friends, and no confidence in anything I said or did. I had lost an eye in an accident when I was only 4, so sports was out, and sports was the way to meet the ladies in the 80s. Yes, I know. Go ahead and groan, I know it rhymes but it's freakin' true! 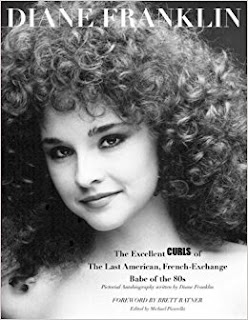 I began to wonder what would be different if I had broken out of my shell. I remember the time I called my crush at home. She was gracious in the awkwardness of the moment, and when the call ended, I was left understanding the very great distance between our two worlds, though the reasons why the distance had to exist at all eluded me. I had gotten the feeling that my calling her again would not be welcome, so I never did. My crush eventually became our high school's Homecoming Queen. Doesn't that just stick into the tender dangling unmentionables? Yeah. It does.
The movie went on, Diane Franklin's face haunted me, and I taunted myself with these memories. I asked myself what I could have done differently, and imagined the very best of scenarios, and the very worst. Everyone does this from time to time. I have a feeling in my case it's not healthy. I hated my life. When I was at school I wanted to run home, and when I was home I looked forward to school. I rushed everywhere only to not want to be where I ended up. I took solace in music, television, and video games. My life was a circuitous route of hopelessness with little joy.
I both looked forward to and dreaded days off, Christmas break, Spring break, or any kind of freakin' break, especially summer. During those times I would wonder what my crush was doing, where she was, and so on. I had the similar thoughts of the few friends I had, too. I would exhaust myself on bike rides that had no destination and revel in my daily mundaneness.
The era of the 80s was a time where there were no cellphones, thus no instant connection with people. There was no internet, thus no social media, and most homes had one phone line with a few extensions. The ringing of a telephone, when I was a boy, was a wondrous, promising event. But as a teenager, it rarely rang for me, and it became a depressing non-event.
Now wait, before you give me the sarcastic 'boo-hoos' and 'grow a pairs' or what-have-yous, please understand that I realize I am not unique. I was not abused by parents or family members, nor overly bullied by anyone. The story of my childhood and teen years is little different than millions of others. I want no sympathy from this post, just understanding, and to convey to others with similar stories that they are not alone. In fact, it's important to remember that sometimes, a teenager gives up and commits suicide because of a host of reasons. They are, each and every one of them, preventable tragedies.
So, when "LAV" wrapped up, and the credits rolled as Gary drove away, crying from the madness of Karen's reconciliation with the Tool, I was left feeling that old forgotten emptiness again. The house was quiet, my wife not home, and my dogs slept nearby with barely a snore.
The thoughts of what could have been stuck with me for a time after, but I began to come back to reality. I had a shitty time growing up and I didn't get the girl. Well, not that girl. I slowly came to the realization that Gary's drive away from the party at the end of the movie was not a retreat, nor was it a defeat. It was a painful, bitter win, but he didn't see it that way. I didn't either. Not until that moment did I realize Gary fought the good fight and had done the right thing by standing by someone in trouble and, in doing so, won the movie and drove away a better man.
I had, in my own way, done the same. I am happily married, love my wife and my life. I enjoy the privilege of writing my books every day and taking care of our dachshunds. I have met wonderful people, artists, fellow authors, even a famous actor here and there. I sure hope my old crush is having a good life and is happy, because I am. I am.

On that happy note, I leave you with this. In my research on the movie, "The Last American Virgin", I found that Diane Franklin wrote her autobiography and self-published it. I think that's just great and it is so appropriately titled.

Diane Franklin: The Excellent Adventures of the Last American, French-Exchange Babe of the 80s

Thank you for reading.