In a World Where Nothing Seems to Go Right...

Okay, so...first, I couldn't access my PayPal account and I tried several times this morning. Just could NOT get in. So, I asked for a password reset. I received the email and proved it was me two different ways. Thus, password changed.

It still would not let me in. I tried several times. Just kept getting the same message. I called them on the phone and changed the password AGAIN. Still wouldn't let me in WITH the person on the phone. The solution? I had to clear the email address from the line and type it in again...THEN enter the password. 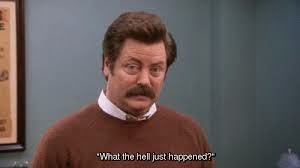 Next...I found an email from my mother-in-law, trying to clue me in to an article on our local newspaper's website. Problem? No link in the email.

Okay, no big deal. My dear and helpful wife takes a moment to go to the newspaper's website while I try to move on to something else. She finds the article and emails the link to me. Mind you, we both work from home and are in the same house.

What could possibly go wrong here? If you guessed that my wife's laptop could see the article but mine could not, you'd be right. Yes, kids, for some reason on my computer, the text of the article was a collection of gray bars instead of words. 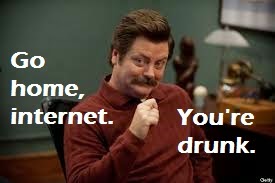 All right...I'm just letting that one go. Putting it behind me. The problem is, I really wanted to read that article. Oh, well.

Thirdly, we've had this weird box on our lawn for years. It's been a real pain in the ass to mow around, but we're pretty sure it's been put there on purpose and is of some importance. After all, it belongs to AT&T. Well, with the last snowfall it started to come apart. Being the proactive citizen who doesn't want anymore disruptions of any of my communications systems than normal, I called AT&T customer service and reported it.

3 freakin' weeks ago! Well, it has snowed some more and do you know what happened? Yeah, you guessed it. Have a look, I took an Instagram picture.

So, now this thing's tipped over. Wires exposed to the elements. So far, nothing has happened, but I wanted to reiterate its existence. I remember having an issue with my Twitter account locking me out a couple of months ago. After several days of trying to get THAT solved, it was found that Twitter mysteriously took a disliking to my "@att.net" email addresses. The solution was to switch it to my gmail account. That worked and I again rendered myself and the villagers inside my head happy campers. The cool thing is, as I mentioned this in a "Tweet" as the kids like to call them, an actual AT&T representative "Tweeted" me, to offer his/her assistance. That was very kind, yes. I told this person in a "Tweet" that it was figured out and he/she replied with a very positive message of congratulations.

SO! Thusly, I attempted to "Tweet" the Instagram picture, in the hopes that this AT&T person would again come to the rescue. Guess what.

You people are so smart! Yes, somehow the "AT&T" part of my dialogue was altered each time I shared the picture with Twitter. I tried a hashtag, I tried the actual Twitter account name for AT&T but each time, the "Tweet" was altered, changing the AT&T bit of it and preventing the representative from ever seeing it. 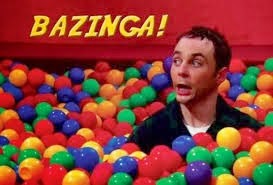 Oh, well. Maybe that stupid thing outside will short out, disconnect me from the drunken internet, phone service and TV and allow me to get to some actual work done.

Until next time, kids.