Jennifer Foxcroft with Her Debut Novel

On this Monday blog, I am happy to welcome Jennifer Foxcroft and her first novel, Sanquine Mountain--Book One in the Camazotz Trilogy 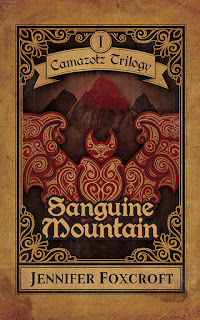 
Sanguine Mountain—Book One in the Camazotz Trilogy—is the debut novel of Jennifer Foxcroft.

Jennifer was born and raised in Australia. She spent her youth dreaming of far away lands and the crazy critters that inhabit them. When she wasn’t swimming in the backyard pool or training the family pet to ride a bicycle, she would visit those magical lands and accompany her characters on their exciting adventures. Even as an adult, her daydreaming of fanciful lands never ceased. To this day, she regards herself as a teenager trapped in an adult body. This series is a glimpse of the characters and places she often visits.

Jennifer adores animals of all shapes and sizes, so it’s no wonder her first series features shape shifters.

An anonymous letter shatters the world Connie thought she knew and trusted.  The news that her parents aren’t really her own leaves her angry, devastated and alone.  The search for the truth leads her down a dark, desolate forest road where she meets a boy in the shadows who has secrets of his own.

Rockland’s life has been ruled by an ancient curse since the day he was born.  Forever labeled a misfit and a rebel, he is desperate to convince his leaders that integration with the modern world will be the salvation of their kind—not their demise.

After their worlds collide in the middle of a dark forest, Connie and Rocks strike a deal to help each other find the answers they both need—away from her lying parents and the judgmental sneers of his colony.  But can they find love on their journey to discover who they are and where they belong in the world?


We stay holding each other for a while and it’s nice. He’s warm. It’s so easy being with Rocks even though I barely know him. He smells of the forest or the moon. It’s weird to think he could smell like the moon, but his scent is clean and fresh. I bite the inside of my cheek and pray he can’t read my mind. The last teenage boy I was this close to didn’t smell this good.


Rocks suddenly jerks back. He’s out of my reach. His eyes are giant and dark, full of fear and something I can’t describe. He grabs the fob watch from his waistcoat pocket and the silver lid clicks open. The noise seems loud against the night.


“What?” My blood pressure is suddenly at ‘run, girl, run’ level again. Regardless of the connection I feel, I don’t know this boy at all.


Anguish is the only word that I can use to describe the look contorting his features. I want to tell him he’s scaring me, but I think he knows.


He grabs the back of his neck with both hands and looks up at the sky before squeezing his eyes shut. His muscles are taut in his arms as though he’s trying to hold on to something invisible I cannot comprehend. What the hell?


He twists at the waist left and right, repeatedly. He’s breathing loudly in through his nose and out through his mouth. He folds his bent arms around his head, but the tension is still visible. Then he doubles over and takes a loud deep breath. When he stands, he flicks his hair back and looks deep into my eyes. I can’t breathe.


He was standing in front of me a second ago; now he’s gone. Simply vanished into thin air before my eyes.


I look around. No hot, Goth guy to the left, or right. Jumping off the car, I peek around the bumper, expecting to see him crouching in the darkness. But he has simply vanished—without a trace. This isn’t possible.


Am I losing my mind?


I’m suddenly aware again of the isolation of this dark stretch of forest road. My parents think I’m at Tiffany’s house painting our nails, and I just revealed a hell of a lot of personal information to a complete and utter stranger, regardless of whatever my gut was telling me. I can almost feel Horror Movie Girl’s disapproving glare.


My chest tightens indicating a need for my inhaler, but my lungs aren’t wheezing. Where did he go? How could I be talking to a six-foot-whatever giant boy and have him disappear INTO THIN AIR?


The cool air chills my skin. All I can hear in my ears is the hammering of my heart. I close my eyes and focus on my breathing.  Something isn’t right. I need to take control, fill the water tank, start my car and get the hell out of here. Now that I’m still and a smidgen calmer, I swear someone is watching me. Spinning around, I’m convinced I’ll come face to face with Rocks. Mere inches from my face, movement catches me off guard and I scream. 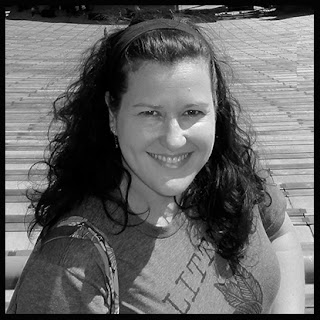