Saying Goodbye to the Last King of Late Night Television

I was born in 1970, a year where late night television belonged to the late, great Johnny Carson. Now, my parents weren't exactly night owls when I was growing up, so my interaction with "The Tonight Show" was intermittent and limited to listening to the man's voice from the safety of the staircase, just above the living room television. While I was too young to understand much of the humor, the very formula of a late night talk show was forever branded into my mind. Not to mention, though I will, so I don't know why I bothered typing that, it felt pretty cool getting away with something like staying up late and spying on what the grown-ups watched for entertainment.

Beginning back when I was seven, I was allowed to visit my grandmother for a week or so, sometime during the summer. She lived in New Buffalo, Michigan, a small, then sleepy and as yet undiscovered and mostly undeveloped town just over the Indiana border. Often times during these visits, I would tire her out from making her drive me from place to place in her giant 1971 Impala, a coupe with doors heavier than two of me, and she would head to bed, leaving me with control of the television. Among the mere handful of channels available, the one signal I hoped would make it over the lake from Chicago was NBC's. Most of the time it would, but sometimes "The Tonight Show" was nearly indiscernible from a blizzard. For all you kids out there, that was before your monitor would go black if it didn't receive a signal. Anywho, watching Johnny Carson with a cool breeze on a warm Michigan night was unbeatable. I was hooked. I loved the actors that visited Carson and the interaction with some guests, who remained on set until the end, could sometimes be out-of-control hilarious. Many of these people are gone now, but search YouTube for some of these visits. Turner Classic Movies sometimes runs some supremely classic interviews. 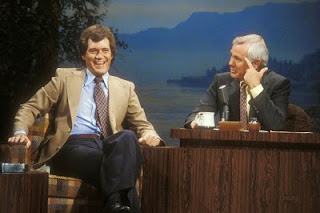 One summer evening at my grandmother's home in 1982, she went to bed and I stayed tuned after Johnny had signed off, determined to live up the night life and venture beyond "The Tonight Show". I found this guy: 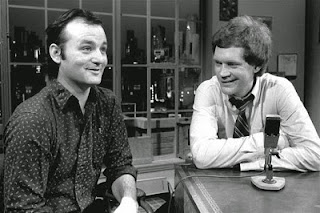 Immediately, it was evident that late night television had changed, at least from my perspective. Dave was different, more relaxed and sometimes flippant. Perhaps you could call him edgy for the age. There was a "Top Ten List", fictitiously sent from "The Home Office in Milwaukee", as he would say for a time. The cards he read from were flipped through the glassless window pane behind him, accompanied by the sound effect of breaking glass. With this casual and repetitive gimmick, this man made it okay, in a weird sense, to break stuff on purpose.
In 1983, for Christmas, I received my first television. I was 13. Immediately, Carson and Dave were there for me just about every week night. It was a routine that became as life giving to my comedic mind as water gives life to my body. Yes, I delved in "Saturday Night Live" and "Monty Python's Flying Circus" and so many others, but to an insecure and lost teenager, Johnny Carson and David Letterman made me smile, laugh and feel better about whatever stupid crap happened that day at school.
I'll never forget David's bit actors, Larry "Bud" Melman, for instance, seen here dressed as Roy Orbison. 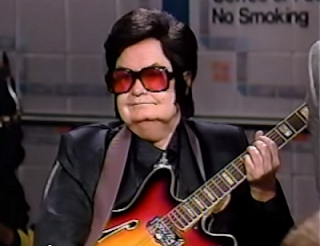 Melman was the go-to man-on-the-street guy and utility bit-man for the show, played by actor, Calvert DeForest. He never failed to make me laugh. The man didn't even have to say a word.
Then there's Chris Elliot, a man that I'll never forget as, "The Guy Under the Seats". He would pop up from a hatch in the floor amongst the audience and his maniacal behavior always cracked me up. He did a lot more than hang out down there, getting into a multitude of costumes and characterizations, but it began under the seats. You've got to visit YouTube, kids. There's tons of these bits to relive and laugh at all over again. 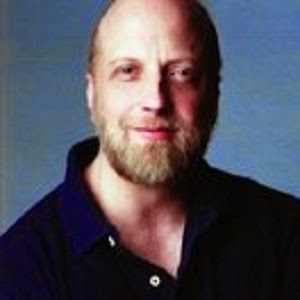 Since the beginning, David had Paul Schaffer and "The World's Most Dangerous Band" as it was once called during the NBC years. Unbelievably talented and intuitive, the man more than just picked up where Carson's Doc Severinsen left off. He brought Rock 'n' Roll to the forefront of the late night talk show and is a musical god. Honestly, the man must have every tune ever written emblazoned upon his gray matter. Genius. 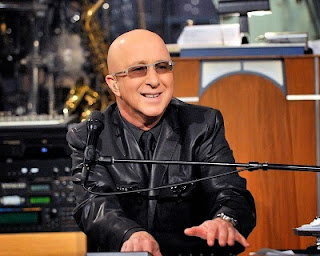 So, throughout my teenage years and into my young adulthood, there was this magic that I took for granted. I was foolish enough to think that my late night entertainment had some sort of permanence and that Johnny Carson was the immortal king and David Letterman, his permanent prime minister.
I was wrong, of course.
May 22nd, 1992, saw the last time Johnny Carson would sit behind the desk of "The Tonight Show". I cried just as hard as everyone else, though I'm sure I was a lot younger than the target demographic. [P'tui! (Marketing Term. Ick!)] Carson was 66 and I was 22. Who can forget that Bette Midler tune? 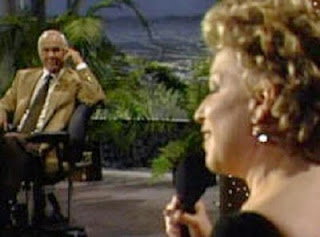 I don't know whether it would have been a good or bad thing if David had taken over "The Tonight Show" when Johnny stepped down. I really appreciate the fact that "Late Night" and then "The Late Show" was his and his alone.
The show had some wonderful and sometimes weird moments, like the time in July of 1982, where actor Andy Kaufman and pro-wrestler Jerry Lawler tussled, for laughs or for realzies, that is still up for debate. The incident I will always remember happened in July of 1987, when Crispin Glover, upset over some type of audience heckling, tried to kick Dave's head off. David got up, left and the show cut to a commercial. 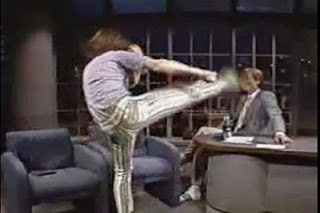 These incidents pale in comparison to the good times, of course, so I won't speak much about the time Cher called him an asshole during her first visit in May, 1986. Since that time, the two have more than made up and, in fact, Cher was on the show last week for a farewell visit, as have a lot of other celebrities. In these final days of the show with Letterman at the helm, it's been a whirlwind of big guests trying to get in their well wishes and last appearances. Every morning, I watch the show recorded on DVR and can't help but tear up a bit with my coffee as celebrities reminisce with David. He takes their compliments with a humble downturn of his head. He needn't do so, however, as he earned his place on television 33 years ago and has remained for a reason. 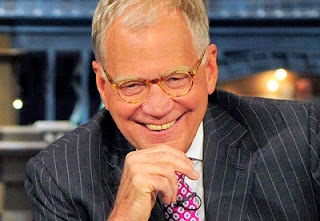 So, with the exit of this man from his daily visits to our screens, this leaves us with some very talented choices. Conan and the two Jimmies are doing fine and are comedic geniuses in their own right. I'm looking forward to what Stephen Colbert does with the show and I hope the sacrifice of "The Colbert Report" will bear fruit. 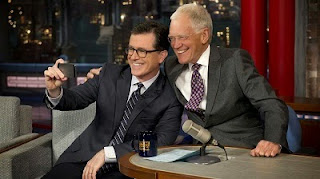 I can only speak for myself when I say that his departure is going to hurt. To me, David Letterman is the last anchor that ties me to my past. For a long time now, I've taken for granted that feeling I get whenever I sit down to watch the show. When I do, I feel a bit like that twelve-year-old that discovered him so very long ago. I will miss the monologues, the "Top Tens", the guests, the bits, and the musical guests (most of them, anyway).
His last show is scheduled for May 20th. That's next Wednesday. He's 68 and I'm 45. 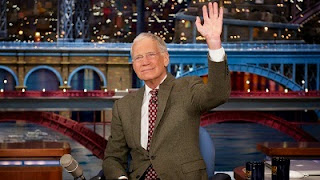 I'm going to be a bit of a mess next Thursday morning. I'll forever miss this man's presence. Hold my calls, please.