Mythbusters: The End of an Era of Calculated Chaos, Maniacal Mayhem, and Blowing Sh*t Up

As with any good television series, an audience is dragged in kicking and screaming, or at least, being anchored with high expectations for some damn solid entertainment. Few shows last more than a few years, as their premise wears thin, or their cast or production team changes. Enter unto the world of television, Jamie Hyneman (below, right) and Adam Savage (the other guy). Together with the help of narrator, Robert Lee, the Mythbusters were unleashed. 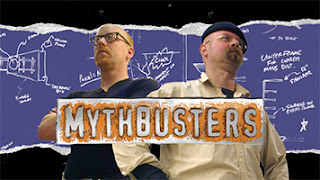 The balls to the wall insanity through science long term adventure (B2WITSLTA for short) began in January of 2003 with, of all things any male human of any age will eat insects to see, jet engines strapped to a Chevy Impala. From there, the first season kept me stupidly hysterical while at the same time educating me with...say it. SAY IT! Science! That first season set the formula for years to come: Myth explained, problem described on blueprints, sometimes solved on said blueprints, then to the build, and onto experimentation, where we were shown whether the myth was 'Busted', 'Plausible', or 'Confirmed'.
Season one's jet car, exploding toilets, pissing on the third rail, the escape from Alcatraz, and other things that may come in handy in a pinch, were covered that magical year. Season two carried right on with the carefully calculated madness. The ancient death-ray, beating a radar detector, salvaging a pleasure boat with ping pong balls and other things that made you smacking your forehead for not discovering, hypothesizing, and solving the issue yourself over the weekend came to our television screens. It was freaking magic!
On it went. The adventure and excitement, the running for cover and blowing sh*t up, and the education-almost-by-accident formula kept us all enthralled.
Then, 2005 happened.
For the first time at the forefront, the trio that were only seen in glimpses and credited as 'builders' in the credits, were knighted and given magical hosting powers. Kari Byron was there from the beginning, floating in the background and doing a lot more than just tinkering like Tinkerbell. Tori Belleci was also a builder from season two on. Then, there was Grant Imahara, another builder brought on in season three. 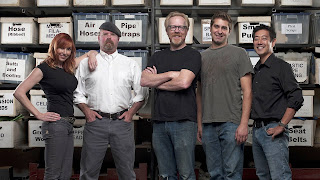 Viewers that paid little attention to these three were taken aback by this sudden stellar propulsion. I remember thinking something like... 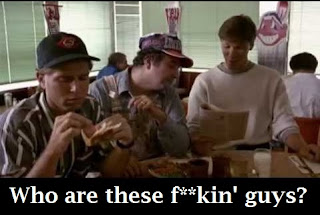 Little did we know at the time that true scientific magic was going to come together to make the already amazing show something really special. While Jamie and Adam were the obvious head honchos, Byron, Imahara, and Belleci were never pressed into the background again. While their tasks may have been considered secondary to any given episode, they quickly made it clear that they were every bit as mythbustery as a mythbusting Mythbuster could become.
The series carried on with the five and we tuned in faithfully to see our favorite quintet play with the laws of physics, gravity, chemistry, aerodynamic principals...and blow sh*t up. They sparked the imagination of countless people, hopefully more in the positive sense, and became themselves, a linchpin of pop culture. So popular and quotable had they become, that even I got into the meme game, where I mashed Mythbusters in with a heavy dose of "Star Trek". 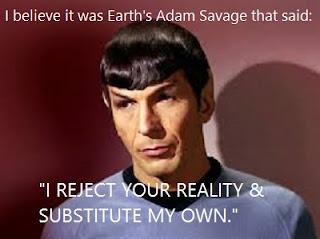 We Mythbusters Faithful were blissfully happy in our accidental education.
And then people happened.
In 2009, the Mythbusters set off a mass amount of a high tech explosive that shook the town of Esparta, California and broke some windows. Big Boo-Mother-Flippin'-Who! Am I right? What's a little broken glass in the name of science?
In﻿ December of 2011, there was a minor incident involving a cannon. It was the result of a great many variables lining up to kick the show's ass and again blemish their reputation. A cannonball was fired in the wrong direction, blowing through a house in Dublin, California and damaging a minivan.
Okay, so, no joke, I guess, but mistakes happen, and Mythbusters was always a game with high stakes. Perhaps these incidents were the beginning of the end of the era, or perhaps it was the rising cost of the cast, and/or insurance, but whatever it may be, all things must pass. At the end of the August, 2014 episode, "Plane Boarding/Bite the Bullet", it was formally announced that Byron, Imahara, and Belleci would not appear again. I remember being shocked, upset, and rather beside myself over this hammer-blow of an update.
With the three 2005 additions now gone, the thirteenth season of Mythbusters seemed like an empty nest. While there were glimmers of the original greatness, "The Hyneman and Mister Savage Show" seemed off. It started wrong, with a poor premise of testing stunts from "The Simpsons" and misfired throughout the rest of this year. For crap's sake, the 6th episode was testing the stunt featured in "The Blues Brothers", where they spun the car in a 180 to park in front of the Chez Paul and whether or not drift racing was quicker than traditional racing.
This went on for the entire hour.
Still, even that episode was fun to watch. It was like spending time with your grown-up high school friends after they sent their kids to bed. They had to be quiet to make sure that they didn't wake anyone up, but they're still your friends and still fun.
No, there won't be another show like it unless a miracle happens and everyone is hired back and allowed to party like it's 2-0-0-5, but what are the chances? Not good.
After fourteen seasons, the show will end where it began, with our dynamic duo of utter madness and nearly fearless shenanigans at the helm. So, for the Mythbusters Faithful, we'll watch and hope they go out with a bang, not a whimper. In any case, we are better, smarter, and more inquisitive people because of them.