Handing Down a Treasure

For men, I would say that selling a car is something we either do because we love cars, want to experience as many as we possibly can, and are making room for another one, or it can be as painful as giving up a pet for adoption. I can't imagine the second option when it comes to our dachshunds, but we are currently faced with having to sell an old friend.

The old friend of which I speak is our 2001 Subaru Outback, LL Bean. We've had it since 2005, when I did a questionable thing of trading my 2002 Subaru WRX for it, no cash transacted. I did that because for one thing, my wife was not comfortable with the manual transmission and for another, larger reason, the insurance industry kept increasing my premium by $100 or more per year. It made sense, and at the time, we already owned another 2001 Outback, so I was familiar with the model. 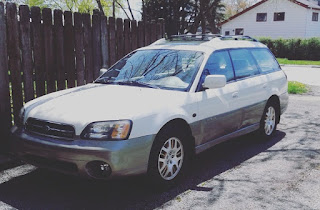 The Bean is a marvelous machine. It has leather interior with heated seats, side mirror and windshield wiper defrosters, a 3.0 liter boxer 6, and the sure-footedness of all wheel drive. At the time, it was the second to the top-of-the-line. That was an Outback VDC (Vehicle Dynamics Control) equipped with the same engine and a McIntosh stereo system. These days, VDC as well as traction control comes standard with Limited models.

For two brief years, we owned the two 2001s and were quite happy with them. However, I was tormented with the thought that I had made a mistake in trading my beloved WRX, a pleasurable vehicle in its own right. So, in 2007, we traded in our '01 Limited on a 2005 Outback XT. This fantastic car is a combination of WRX and LL Bean, as it shares the turbo-charged, intercooled power plant with that year's WRX and has the interior trimmings of our friend, the Bean. It's really a successful hybrid of hot rod and taxi cab. Tex Avery would be proud. 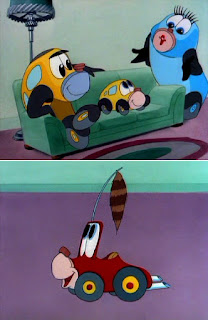 If you don't know the cartoon to which I'm referring, Google "Tex Avery One Cab's Family". You won't find it on YouTube.

And so, since 2007, we've had this lineup, these two wonderfully comfortable, fun, and reliable machines. Despite the fact that my wife was never crazy about having two white cars because it made it look like we were driving a corporate fleet, I know she loves them, too. They've never let us down or left us in fear of weather conditions short of severe.

As time goes on, however, things get newer and we get older. My mother-in-law, inspired by our good fortune, purchased a 2015 Outback 3.6R Limited and we fell in love with that one as well. She's lent it to us for a couple of road trips and it's even more comfortable and capable than ours. One can truly drive some twelve hours or more and not feel beat up or sore from the ride.

So, just a couple of weeks ago, my wife purchased a 2017 Outback 3.6R Touring. It's even more amazing, and with it's safety features it really does put one at ease, though not too much at ease that I want to take my hands off the wheel and wing it. It's still a driver's car, and with its Java colored leather, it's one sexy beast. There will be great times ahead for many, many years to come.

This addition to the family has kicked the Bean out of the garage and, as we are but two people with no children to hand it down to, I found someone that wants to give it to his sixteen-year-old daughter. I've spent some quality time with the Bean over the last couple of weeks. I took it for an oil change and a coolant flush. I replaced the original radiator hoses and windshield wipers while there. I'll be damned if I'm going to hand over a car to a new driver and have her freak out about a white cloud coming out of the grillwork, among others things like visibility in rain. Let her learn the car first. I vacuumed and cleaned the interior, polished the fog out of the headlight lenses, and cleaned the K&N reusable air filter. I've spent many long moments with the old girl, remembering, admiring, and yes, even tearing up a little. Hell, I've even cleaned out the black gunk that has built up inside the refueling door. After all, my wife and I have owned Outbacks of the 2000-2004 generation for sixteen years. It will be very strange to not have one around.

I will miss the Bean's elegant simplicity, the low-tech, but-not-at-the-turn-of-the-century interior, the quirky, two-paneled sunroof/moonroof combination. I will miss its shape, its color, the weird way the passenger side sun visor clips the rearview mirror, turning it askew. I will miss that crazy, mysteriously unlabeled button on the radio that tunes it to the NOAA weather channels. This feature disappeared with the 2005 redesign. I will miss also, the strangely designed rear headrest for the middle passenger in the back seat that blocked the light sensor in the auto-dimming mirror. We had to remove it to get the dimmer to work better when trucks pulled up behind us at a red light at night. That was an issue in both our 2001s and it makes me smile. Crap, I'll even miss that button for the rear-defogger that sticks and has done so since I got it.

Even as I write this, the buyer has texted me and arranged to come by on Wednesday afternoon to pick it up. I have to say that I'm very, very sad to see my Bean go, and I'm filled with a desperate anxiety, so much more intense than when I sold the first car I ever owned, my 1970 Chevrolet Caprice back in 2005. I had owned that car for sixteen years as well.

Times change and so do we all, but sometimes, for us car loving guys, it's a heartbreaking thing to let the special ones go. I just hope I don't break down in front of the guy who's buying her. I'll never hear the end of it from the boys at the pub.

Bruce Springsteen - Further On (Up the Road)

Take care and thank you for reading, everyone.