Hello everyone and welcome! I thought I'd have a little fun with this week's blog and count off my top ten favorite police cars from movies and television shows. Time for a little mindless entertainment.

Okay, so, I'm thinking that the list should include cars that are obviously police cars. For instance, you won't find Frank Bullitt's 1968 Ford Mustang on the list because it was the character's personal car. It had no lights or sirens. I've focused on real car models here, so I'm not listing the flying police vehicles from Blade Runner or The Fifth Element. Finally, I'm only including cars from movies and television that I've seen, so I'm sure many of you have different ideas.

Feel free to comment with your favorites at the end. I'd love to read your choices. 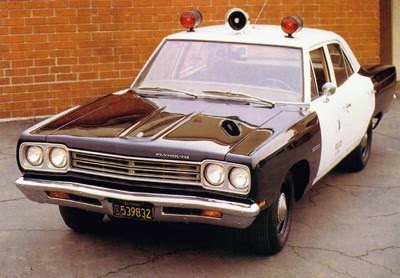 Powered by a 340 cubic inch plant, the mid-sized sedan was heavily relied upon by the show and in real life by many police forces. The lights on the one in the show were rather simple, shining a solid red in front and alternating flashing yellow at the rear when they were in pursuit. The Belvedere was later replaced by the 1972 AMC Matador, which, even though it was used by the show far longer, was just not as cool looking.
9) Here I have the 1976 Ford Gran Torino from the show, Starsky and Hutch. Who could forget that bright red two-door with that out-of-sight, roof-wrapped white stripe that came to a point on the front fenders? 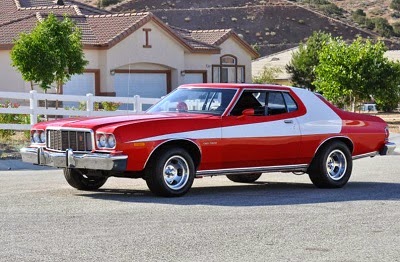 With Ford's famous 351 block, this car had some punch, but it's weight didn't make this a truly fast car. It sure looked great on television in the '70's, where form almost always exceeded function.
8) From the movie, Smokey and the Bandit, we have Sheriff Buford T. Justice's 1977 Pontiac LeMans. 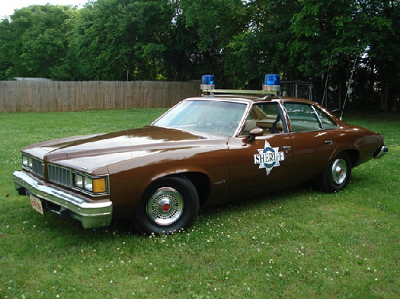 Sort of an odd-looking duck and certainly huge, this car really struck me as interesting when I first saw the movie because I had never seen a Pontiac police car before. The idea that any company beyond Chevy, Ford or Dodge would build a vehicle meant for public service had never occurred to me. In the '70's and from a child's perspective, Pontiac was halfway between Chevy and Cadillac and considered a luxury brand. Watching it chase another Pontiac product, the Bandit's Trans Am, pitted the bigger, bumbling oaf of a car against its smaller, more nimble little brother. I couldn't help but cringe in delight when Justice's car lost its roof under that truck trailer.
7) On the subject of Pontiac, number 7's slot belongs to the 1980 Pontiac Firebird Highway Patrol car featured in the beginning of 1981's, The Cannonball Run.

I was a huge fan of Trans Ams when I was young. I mean, I just didn't know any better and when I saw this thing chasing the much more powerful and agile Lamborghini Countach, I thought it was fantastic even though its butt was kicked. Pony cars, as they were called, were only meant to have a top end of 120 to 130 mph, as they were intended for short tracks. By 1980, the Pontiac blocks were notoriously anemic due to the environmental control devices they were forced to strap on, so much so that during the filming of Smokey and the Bandit Part 2, the car wranglers were forced to add NOS to an already turbocharged model to achieve some decent performance. The capabilities of foreign exotics really were allowed to shine in "Cannonball" as they cranked along at effortless, blistering speeds.
6) At a respectful number 6, I have placed the 1961 Ford Fairlane from The Andy Griffith Show. 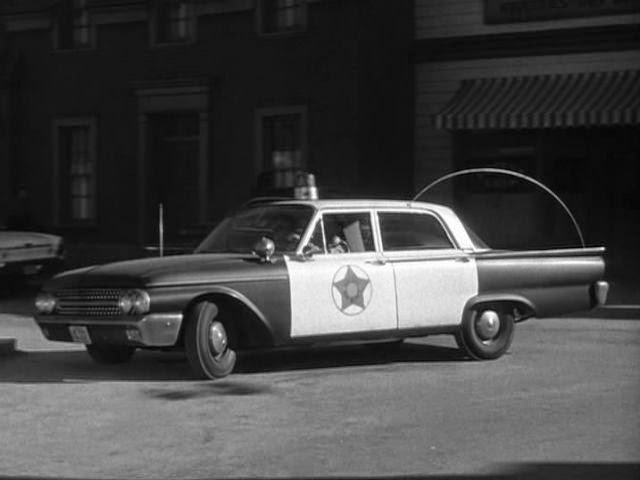 Now, there were plenty of different Fords used in the show, but this one's curvy sides and wide grill stick out in my mind. The single rotating light on the roof was almost never used, except when Barney drove the thing. If Sheriff Taylor had the lights and siren going, you knew there was some serious shit going down in Mayberry.
5) While I am no Jeep fan, I have to mention the 1994 Jeep Cherokee used in the Sci-Fi (I refuse to acknowledge the new logo, SyFy) original series, Eureka. 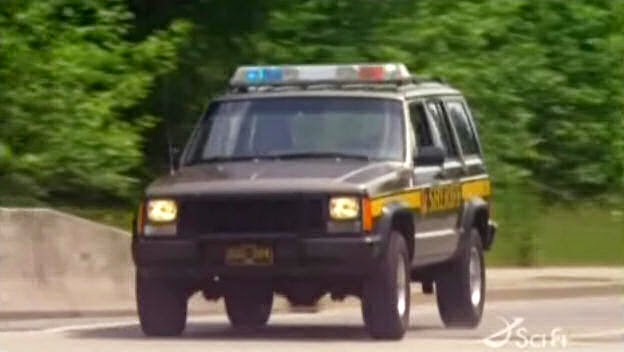 This poor thing was destroyed so many times, it should have been named Kenny. Sheriff Jack Carter, played by Colin Ferguson, never failed to get it wrecked in the most hilarious fashion. It was the perfect mechanical sidekick for Carter. After a few seasons of the show, the perpetually doomed Jeep endeared itself to audiences.
4) Sideswiping its way into 4th slot is the 1977 Dodge Royal Monaco that was driven by Illinois State Troopers Daniel & Mount from The Blues Brothers. 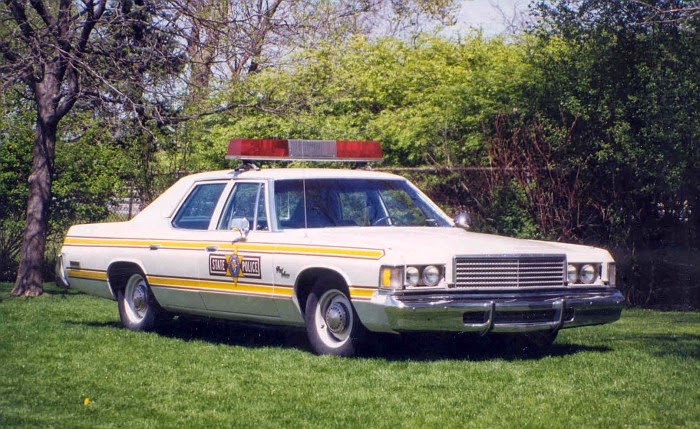 There must have been a hundred of these heffers destroyed in the movie, but watching a pair of them go slip slidin' away through that mall, chasing an older version of itself driven by the infamous Elwood Blues, was epic. One can assume that it had Mopar's famous 440 cubic inch motor, but it must have needed it to move this land yacht.
3) For number 3 on the countdown, I turn back to Eureka. The other police vehicle in town was a 2012 Subaru WRX hatchback with a 265 hp 2.5 liter boxer 4. 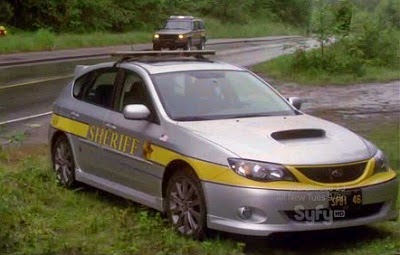 I'm a huge Subaru fan and have been since our first one back in 2001. This little car is a real beauty and I loved it when they added it to the show.
2) I like this one in some ways even better than the number one car on the list. It is Max Rockatansky's interceptor, from the 1979 movie, Mad Max, a 1974 Australian Ford Falcon XB Sedan. 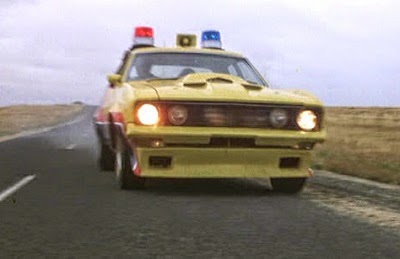 I just love this car. The red and blue 4 element lights are almost too big for the thing, but the dual siren makes it work. I wonder how many of our American cruisers would look with their light bars set back on the roof like this. The high rise hood featured here is custom, concealing either a 302 or 351 cubic inch plant. I like this car so much, here's another picture. 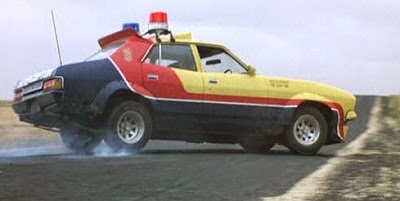 I love the spoiler on the roof. Just check out that body shape. Unlike here in America, the Aussies never got into Mustangs. Instead, they make everything they can out of a Falcon. For those of you that have seen Mad Max, even the white truck towing the camper that gets destroyed near the beginning of the film is a Falcon pickup.
1) Now for the number one police car in the countdown. Also from the movie, Mad Max is another Australian Ford. It's also a Ford Falcon XB, but this one's the 1973 GT351 coupe version. 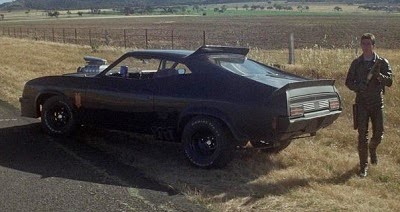 It's no wonder the Aussies don't have Mustangs. They don't need 'em. Look at that monster. Now, it's mentioned in the movie that it had 600 hp at the rear wheels, which is a big deal when one considers that some power is lost through the drivetrain. This means that we can assume the motor possessed around 640 brake horse power. For the purposes of the movie, it has been said that they never bothered connecting the Weiand supercharger that we see sticking out of the hood. 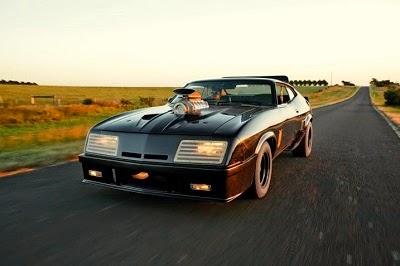 Ain't it purty? There are four exhaust pipes curling up from underneath this car, as can be seen in both pictures. This implies that there is one pipe per cylinder and no mufflers. The front clip is not stock on this car, but comes from a Monza race car, similar to the one pictured below. 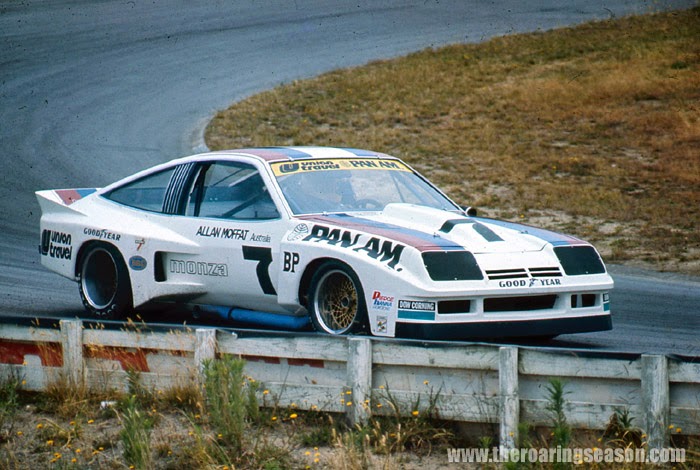 There are a good number of these Ford Falcon XB coupes built with fully functional superchargers. You have to hear this car to believe it. I've included a link to a YouTube video of someone driving alongside one at near highway speed. You'll hear the whistling of the supercharger and the exhaust notes. Simply wonderful!
https://www.youtube.com/watch?v=S4ejbUHlLtg
So, there you have it: My top ten movie and television police cars. I'd like to know what your favorite cop cars are. Feel free to comment and say hello!
Thanks everyone!