The Looking Back Fuzz

So, it's finally occurred and I never thought I'd see the day. I internalized it, not letting my wife know that it bothered me, but it does.

You see, when I was a child, I was fortunate enough to spend some summer time with my grandmother in the wonderfully calm and beautiful town of New Buffalo, Michigan. I'd get a week, sometimes two, sometimes an odd number of days somewhere in between, but there it is. I could ride a bike around town, or we'd watch television, go shopping, have dinner at a restaurant that one of her friends managed or owned, I can't recall. I do remember great baskets of breaded baby shrimp, shrimp sauce, beds of French fries, and glasses of root beer that never seemed to go empty. I remember that when we did eat in, it was often a Tombstone frozen pizza and how oddly she pronounced the word, pizza, as more the leaning tower than the dish. I can hear her voice speaking it and it makes me smile.

If I were lucky, and good, I'd get one of those greasy burgers from Redamak's, a place that's been around for decades and thrives to this day. Or, sometimes, I'd get the burger at Charlie's Truck Stop, which is now something else. On hot summer evenings, a banana split from the Tastee Freez would top off a fantastic day. I think it's a pizzzzzz-aria now.

These visits lasted from the late 1970's on through the 80's. I visited her many friends right along with her, sharing in her joy of them. I even called her friends Vera and George my aunt and uncle. My grandmother hung out with some really fine folks and I enjoyed them. I'd like to think most of them enjoyed having a youngster around without the attachment that came with being relation.

It's been right around thirty years and all those people are gone. Every last one. I have trouble recalling some of their names.

Many times, my grandmother, Pauline was her name, would take me to movies at a Michigan City, Indiana theater, which sat on the fringes of the parking lot of Marquette Mall. In that theater, we saw some James Bond's, two of the three "Smokey & the Bandit" flicks, "Cannonball Run", and some others. Back then, going to movies was a big deal, perhaps not as big as thirty years prior, but I wasn't around for that. All I know is that I enjoyed them very much. I even got her to go to "Return of the Jedi", where she covered her eyes until the scene in Jabba's palace was over. From what I can see from the latest shots on Google Earth, the theater is there, but it appears to be boarded up.

Last night, while my wife went out to take part in her church's extracurriculars, I decided to pick an old fave from the DVD collection. It was 1983's "WarGames", the Matthew Broderick, Ally Sheedy movie about the computer hacker and the threat of nuclear war and all that. A faint memory tried to seep in as I loaded it into the machine, but sadly, it bounced off my cranium like a firefly in the dark. I watched the movie, enjoying it as I always have, even while noting the continuity errors and wondering what the screenwriter was thinking when a character spoke a line of 'Duh'-alogue. 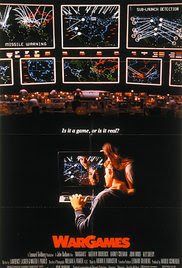 As I put the movie away, that fleeting memory returned to me. My grandmother had taken me to see this one. We had watched it together in that theater in Michigan City. The thought had never fully dawned on me throughout the picture.

I know what you're thinking and you're right. "Return of the Jedi" was released in May of 1983, and "WarGames" came out early the next month. That's two new movies that she took me to in the same visit. Yeah, I know. I was spoiled, so deal with it.

So, the evening went on and I began remembering more, thankful that I could, but sad at the thought that the details and triggers, if you would, of my memories are fading like the vibrant color from an old photograph. Who was it that said you can't go home again?

Do yourself a favor, would you? Trust me, it's a small favor and one that you will benefit from. All I need you to do is to take a step back from the news and social media and go through some of your old stuff. It doesn't matter what it is, whether it's from your movie collection, music collection, old baseball cards, old stuffed dolls and toys, whatever you've got. Pick something that ties you to your grandparents or someone that was around when you were growing up.

If it's a movie, watch it. If it's music, turn it up. If it's a photograph or a toy, hold it and stare at it for a while. Close your eyes and remember.

That's not so hard now, is it?

Thank you for reading. :)